The Omega 8007 is a 5th generation masticating juicer that comes with a lot of improvements compared to the juicers of older generations. Let’s figure out what are these improvements.

Omega 8007 Heavy Duty Masticating Juicer is considered by consumers as one of the best cold press juicer on the market and truly it is. A slow running auger prevents juice oxidation, larger feed chute and screen makes juicing better and easier, and housing became BPA-free. But first things first.

Omega company is well-knows for its masticating juicers that prevent juice oxidation due to tough augers that chew and masticate the produce at a low speed of 80 RPM (stand for revolutions per minute). Juice yielded by such method retain all the nutrients and vitamins that a very valuable for our organism as they are responsible for our health conditions. The small quantity of these things in the human body can conduce to a disease with bad circumstances.

Drinking juice yielded with the Omega 8007 has high nutritional value that can prevent many diseases caused by lack of vitamins and are the natural product for a good well-being.

The Omega 8007 features Dual-stage juicing system which means very dry pulp and high yield as the ingredients is crushed down at first and then is chewed additionally to get more yield. The pulp is ejected automatically to the pulp container, hence you don’t need to do anything with it.

The larger funnel assembly and larger juicing screen compared to the older models makes juicing more comfortable and ends up in higher yield respectively. Also the juicing screen now made out of stainless steel which makes it much stronger; other parts of juicing screen are made out of GE Ultem material which is very strong (the auger made out of the same material) and can handle hard fruits and veggies.

A special blank plate comes with this juicer allows you to make thinks like the nut butters, the sauces, grind up cabbages and much more. It is made out of thicker plastic so it’s quite a strong thing. With extra nozzles that comes with the package, you can make other thinks like pasta, baby food, frozen desserts and many more. Basically, purchasing the Omega 8007 you get not only the juicer, but a food processor as well.

The Omega 8007 has a 15-year warranty on the entire unit and parts, so you don’t need to worry about if something goes wrong, breaks and doesn’t work.

Suggested Reading: How To Make Almond Milk With A Juicer

Both Omega 8007 and Omega 8008 are the identical masticating juicers. There are only two differences between them: colour and price.

Hence there is no point to pay more unless you want to see chromed juicer in your kitchen.

There are four main differences between these juicers. All of them are explained below:

The other differences are too inconspicuous to be mentioned here as they won’t make any differences while juicing.

What this juice extractor juicing the best? It works with hard ingredients like apples, carrots, beetrots?

It can handle both hard and soft fruits well, yet it’s the best choice if you are going to squeeze juice out of leafy greens and wheatgrass. In addition, the Omega 8007 can juice citrus fruits.

If you are going to make juice with fruits and vegetables you might be interested in the Omega VRT350 or VSJ843.

Is it easy and fast to clean?

Yes, it is very easy to clean. Cleaning of the whole juicer takes no more than 3-4 minutes on average.

Does this juicing machine make any noise?

While juicing you can hear how the auger chews the produce, although it is not noisy at all and you can have a easygoing talk while juicing without raising your voice.

What is the size of the feed chute?

Where the Omega 8007 is manufactured?

It is made in China.

The FAQ section will be updated as new and important questions come to our attention.

What’s in the package?

Here is a list of parts and accessories that comes with the juicer.

If you want to make a good investment to improve your health, have more energy and be more mentally stronger – the Omega 8007 is a very good option. Juicing with this juicer won’t bother you due to it’s ease of use and clean up.

Previous Post: « How to Make Almond Milk with a Juicer
Next Post: What Is Juicing? Is Juicing Really Healthy? » 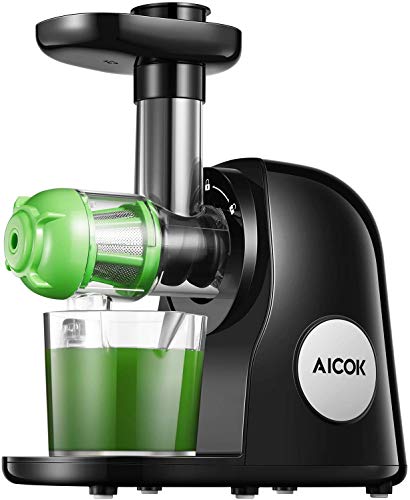